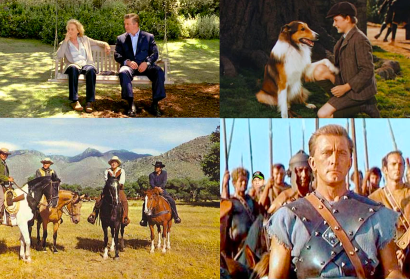 Hundreds of Hollywood movies and TV-productions have been filmed in Thousand Oaks. Cinematic tours by limo services in town have become very popular. Despite what you might have thought, Conejo Valley with its canyons, mountains, fields and scenic nature is a Hollywood favorite for filming. Did you for example know that the British film Lassie Come Home (1943) was filmed in Wildwood Regional Park? Or that a hillside by California Lutheran University (CLU) was used in the filming of Spartacus? Few people know that the zoo featured in We Bought a Zoo (2011) actually was Greenfield Ranch in southern Newbury Park! From a gas station in Thelma & Louise (1991) to the home in It’s Complicated (2009), Conejo Valley has been seen in tons of movies! Tours to various filming locations are tremendously popular for even LAX transfers and LA limo services. From the most recent movies and TV-shows to the old classics, this is our list of best movies short in Ventura County’s Conejo Valley!

While many may know that the neighborhood and home in Poltergeist (1982) is located in nearby Simi Valley, did you know that scenes for the movie actually also was filmed at the Holiday Inn in Thousand Oaks? The actual house and residential area is a popular destination for limo services in Simi Valley, where clients take a limousine to 4267 Roxbury Street to see the house and neighborhood from the famous horror movie. Have you ever thought the location of Lillian’s engagement party looked familiar in the film Bridesmaids (2011)? This was actually the Sherwood Country Club on W. Stafford Road! This place is a common destination for our limousine service. You may also recognized the locale in the hospital scene in Click (2006) featuring Adam Sandler, which also was filmed here in Thousand Oaks. Furthermore, the San Angeles Police Department in the film Demolition Man (1993) is actually Baxter Pharmaceutical on 1 Baxter Way in Westlake Village! Car stunt scenes from both the Dukes of Hazzard film (2005) and TV-series (1979-1985) were filmed off Potrero Road in Hidden Valley. Why not order a Thousand Oaks party bus to bring your friends along on a cinematic tour to Hidden Valley by limo bus?

A place often checked out with limo services or even Thousand Oaks party bus vehicles is Ventura Farms on 235 W. Potrero Rd. This was the location of the Carrington stables which appeared in numerous episodes of Dynasty (1981-1989). The Hidden Valley area has been used for filming many movies and TV-series. Recently we transferred people here to film an episode of the Biggest Looser (2004-2016) where they ran from Hidden Valley to Camarillo. Just a few of the movies filmed in Hidden Valley include Commando (1985), Come On, Tarzan (1932), Roadhouse (1989), Doctor Doolittle (1967) and Lassie Come Home (1943). More recent movies and TV-series includes Alvin and the Chipmunks (2007), American Horror Story (2011-), Beverly Hills, 90210 (1992) and Columbo (1971). Come On, Tarzan (1932) was for the most part filmed at French Ranch, another popular place for limousine service travelers and even movie enthusiasts utilizing LAX transfers. Other movies filmed at French Ranch include Law and Lawless (1932), The Lone Ranger (1956), Border of Outlaws (1950), The Californian (1937), Rainbow Riders (1934) and many more.

Lassie Come Home (1943) was in large part also filmed in Hidden Valley, but also includes scenes shot in Wildwood Regional Park. You may have thought Dodge City in Gunsmoke (1955-1975) looked familiar, particularly if you enjoy hiking. This fictional city was actually also located in Wildwood. Other TV-series to be filmed in Wildwood include Bonanza (1959-1973), which was filmed at the former Janss Conejo Ranch in Wildwood, along with other Western-favorites such as the Rifleman (1958-1963), the Big Valley (1965-1969) and Wagon Train (1957-1965). Movies filmed in Wildwood includes Flaming Star (1960) featuring Elvis Presley, Gunsight Ridge (1957), the Wrapes of Wrath (1940), Duel in the Sun (1946), Wuthering Heights (1939), Clearing the Range (1931), Flaming Frontier (1958), To the Shores of Iwo Jima (1945) and the Horse Soldiers (1959). Despite its story taking place in Japan, many will be surprised to hear that most of the movie Memoirs of a Geisha (2005) was actually shot at a private ranch here in Thousand Oaks. Order a party bus and come see the ranch for yourself!

Did you know the community of Lake Sherwood actually is named for Sherwood Forest in Robin Hood? As most of the film Robin Hood (1922) was filmed in Lake Sherwood, the residents decided Lake Sherwood would be an appropriate name for the new community. Later, the movie the Adventures of Robin Hood (1938) was also filmed here as well as Tarzan the Ape Man (1932), which used wild animals transported from Goebel Lion Farm in Thousand Oaks. No wonder “Robin Hood Park” in Lake Sherwood is such a popular destination for our Thousand Oaks party bus service! Some additional movies filmed in Lake Sherwood include The Last Mohicans (1932), Galloping Romeo (1933), The Cowboy and the Kid (1936), Way Out West (1937), Red River Renegades (1946), Three Hours To Kill (1954), Old Yeller (1958), and many others.

While this one may be harder to recognize and not exactly an LAX transfers destination for tourists, the mansion of Skeeter’s boss in the film Bedtime Stories (2008) is located on 2300 White Stallion Rd. in Thousand Oaks. You may have watched the TV-series 24 (2001-2010, 2014) without realizing that president Charles Logan’s home in season five and six is actually Ventura Farms in Hidden Valley. Furthermore, the former Rancho Conejo Airport in Newbury Park was used to film the airport scenes of the movie It’s a Mad, Mad, Mad, Mad World (1963). While scenes from the TV-show M*A*S*H (1972-1984) were filmed at Malibou Lake, scenes from the Grapes of Wrath (1940) was filmed at Janss Conejo Ranch in today’s Wildwood Park. While getting a limousine service to California Lutheran University might be most popular for dates and friends outings, we have also transferred Thousand Oaks party bus and limousine service renters here to see the scenes from their favorite movie, Spartacus (1960) which was filmed in the hillside right behind the university. Before California Lutheran University even was built, movies as Welcome To The Hard Times (1967) was filmed where the university now is located. Also nearby is where limo services visit the site of the ranch in The Rifleman tv-series. Another popular place in T.O. for film-enthusiasts is to visit the JMJ Ranch on Potrero Rd. to see where scenes from Teen Wolf (2011-) were filmed. We recently even had a birthday spent onboard a Thousand Oaks party bus visiting film locations in Hidden Valley, including where Teen Wolf was filmed.

Many other Thousand Oaks-based ranches have been features in classic Western movies. Some were filmed at Ventura Farms at 555 W Potrero Rd. These include In Old Kentucky (1935), Rainbow Over Texas (1946) featuring Roy Rogers, Sons of New Mexico (1950), and many others. An unnamed ranch at 426 W. Potrero Rd was used for filming Rainbow Over Texas (1946). At the former Conejo Valley Airport is where The Paleface (1948) and Riders of Whistling Pines (1949) amongst others were filmed. At Greenfield Ranch (1388 W. Potrero Rd) is where Down Argentine Way (1940) was filmed, while much of the TV-series Fury (1955-1960) was done at the former Jungleland. Hondo and the Apaches (1967) was in large part filmed at the former MGM Ranch in Hill Canyon in Newbury Park. Hill Canyon can be visited by driving – or taking a limousine service, – to Rancho Conejo Playfield. Another ranch, Joel McCrea Ranch at 4500 N. Moorpark Road, was used for the filming of The Great Man’s Lady (1942).

See also our list of Top 7 Best Things To Do In Thousand Oaks!

Whether you’d like a cinematic tour by limo services of the Conejo Valley or just LAX transfers, we can help you! We have been located in the city for over twenty years now and service all of Southern California with regional offices in cities such as Ventura, Simi Valley, Los Angeles, Palm Springs and Santa Barbara. Whether you want a limo or party bus in Thousand Oaks or any other Ventura County city, we can take you to the sets from your favorite movies, head out on town for a night of fun or any other activity you may have in mind.